Why? The reason I decided to write the book is quite simple but at the same time also extremely convoluted to explain. I will do my best to be brief as my research also taught me that the Preface and Prologue are not overly popular with certain types of readers and sometimes aren’t read at all. Ironically, if you are that type of person you may not have read this point and are probably well into chapter one.

For many years I have been having, and still have, recurrent dreams. These dreams are so vivid in their minutiae that just over six years ago I slowly began to remember incidental details of some of them in my waking hours. A lot of the episodes were obviously related to things in my past such as music I liked, people I admired, things I had done and general experiences, etc, but some were much more capricious, mercurial and horrific. Weird and wonderfully diverse, they often had very confusing, frightening and sometimes violent subject matter. Some were more romantic or even of an erotic nature and others seemed to mix all these facets together in a sudden waking, sweat-inducing, nightmare type of effect.

After years of experiencing these apparently random images flying around my head, when waking, I had got into the habit of immediately grabbing a pencil and paper and writing down a few words of description about what had occurred in that specific dream. Before, as is the way with these things, it faded to irrelevance. After a year or more of doing this I decided it would be best that the writing equipment was left on the bedside table rather than the office table. Stubbed toes and rudely awoken partners do not good bed fellows make. Slowly over time, I was beginning to capture the essence of these irregular but repetitive paramnesia events.

Strangely, as the years progressed, I started to notice a pattern. I had quite often scribbled down the same things, almost word for word, time and again. There was some considerable consternation along the way and, getting all the information collated before even starting to write in earnest, was a major task for me. I was an untrained, inexperienced nobody who had no clue at this time that this was anything more than indigestion.

I did not have any great issue with the unusual content, although some of the mental images were quite scary and graphic. The problem I did have was that collation was only possible randomly; it wasn’t as if these dreams were occurring or re-occurring every night. Patience was sometimes stretched when I was awoken by a particularly graphic episode and, with pen in hand at four in the morning, my mind would go blank, leaving me completely insomniated…

And the final back cover. 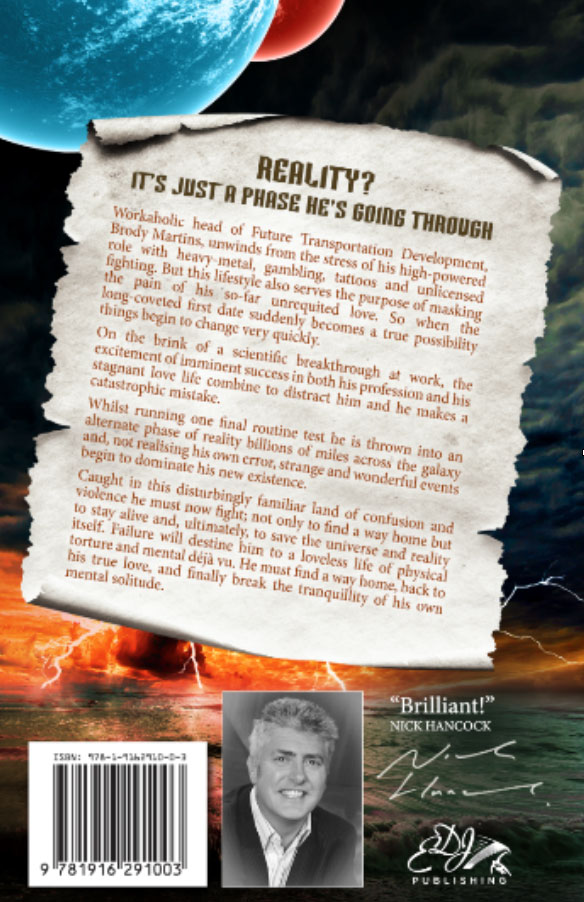