By understanding vaguely how this trait of quoting famous lines from films or songs is used you can hopefully more easily get a grasp of what I tried to achieve at my BNI meetings. I was, as mentioned, finding it difficult to say much of great interest or inspiration after 7 or 8 years of doing these meetings. So I decided to try to use a technique I had learned years previously as an insurance salesman.

This technique was called “Knocking the prospect off their feet,” it involved saying something that the person who you were attempting to sell to, simply would not expect you to say. For example in a situation where (quite understandably) the prospect was bored, uninterested in insurance and may say… “Sorry I’m not interested” You would knock them off their feet by saying something like… “That’s brilliant, I was hoping you wouldn’t be interested, most people aren’t… UNTIL they hear this little gem…” At which point you then re-direct their attention to one or other more pertinent bits of information such as potential financial gain or names of other people they definitely knew that you also dealt with. Miraculously they quite often went from uninterested about ‘insurance’ to… “How much did you say…” and “Oh… you deal with my mate Joe?” And so interest is created where non existed moments before.

From selling insurance, with a little modification I made this into a superb little tactic to use when losing a group of people’s attention. If they are just on the verge of either heckling or falling asleep I could suddenly hit them with something so unexpected that they would immediately take interest for the next few moments allowing me to re-centre their attention on what I really wanted.

Day one of the experiment went something like this :-

Morning, Eddie Johnson, Washerwise… (big pause)… You all know me, know how I earn a livin’, I’ll catch this bird for you, but it ain’t gonna be easy, bad fish, not like going down the pond chasin’ blue gills or tommycots, this shark, swallow you whole, little shakin’, little tenderisin’ and down you go… And so on for about 45 seconds. Most of the members, even the more stiff necked boring old farts, sat up and took notice. Some because they recognised the iconic Quint at the blackboard speech, some because they had no clue what I was on about and others because they were intrigued.

In the final 15 seconds of my allotted 60 I then related the speech to my business with a daft one liner of my own :- Washer-wise, Fast Friendly Service – No fish stories! and then with no explanation I sat down. The following week I did the same with another equally famous monologue :-
Let’s see the buyers from the spiers, the needy from the greedy, if you ain’t up here shoppin’ your probably up here shop liftin’ etc etc … (Lock Stock) Finished with… Washer-wise, Fast Friendly Service – We do Washing Machines, Tumble Dryers… Lock Stock… We do the bladdy lot! Then with no explanation I sat down. It went on like this for weeks, First Blood, Cape Fear, Last Action Hero, War of the Worlds and others. Week after week, more of the people around the table paid more attention to my 60 seconds in the anticipation of “which film will it be this week?”

The result was an uptrend in referrals from members whose minds I was in the front of far more than by boring repetition. So even some of the stuffiest members came out of their traditionalist shells and embraced the concept of being different. Sadly there were some that thought it belittled the serious nature of the meetings. Those are the ones I refer to as… ‘idiots’ amongst stronger expletives. Jealousy is a strange emotion. Then along came the 10 minute week where I was going to be hard pressed to remember all the lines and flit in and out to keep in the various characters, so I decided to film it instead, in costume…

The results of my stupidity and my inspirational marketing techniques are soon to be posted for your fun watching entertainment, watch this space… 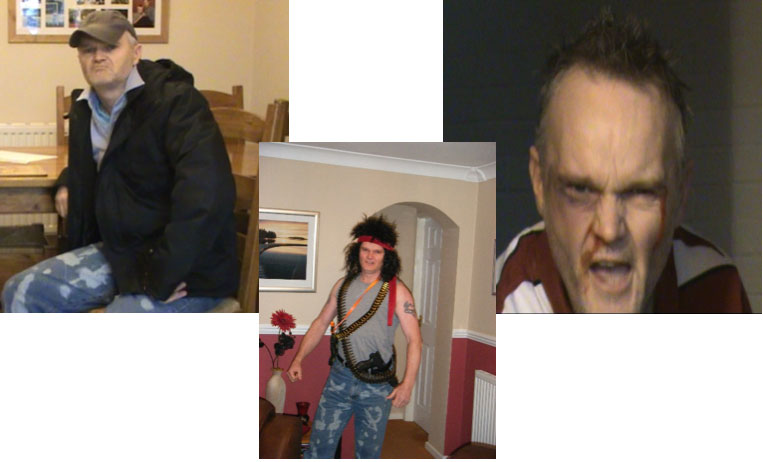