How it all relates.

After the last two episodes of this blog I’m sure some are thinking… but how does this relate??? Well it all later became a strong character trait of my character Brody and something that, if you read between the lines, heavily influences the outcomes of some of his adventures. It also allowed me to have fun by plagiarising many other works, quoting and mis-quoting them within the narrative, getting other characters to accidentally use lines Brody would recognise to see what his reaction would be to their unintentional usage of his own idiosyncratic style.

I have woven hundreds of quotes from his musical heroes (Also my own) into his speeches, descriptions of what is going on, sometimes he uses them knowingly sometimes it is just part of the story. In all honesty I doubt many will spot them, but if ever my work gets critical acclaim it will be of some interest to dig them all out and go through how and why they found their way in in the first place.

Many people suss who the group are but as of yet nobody has found their name in the actual text. It is there but well hidden. I have often found that fact is stranger than fiction and by upsetting some and entertaining others there was a definitive trend in my life repeating itself. I am different!

To channel this difference and to try to bring it into real life as a positive I needed to find a vehicle to carry all the weird and wonderful facets in such a way that others could appreciate the qualities whilst enjoying the fun. Sadly to date I have missed the mark somewhere and still find that the majority of people have no idea what I am all about. Of those who do understand, many don’t admit to it or they might eventually need to drop their cloak of respectability.

We live in a scary world of nobody really caring about anything but themselves. I strive to be more prosaic and see a bigger picture… Some call it inflated self-importance or egotism. I just don’t want this very short existence I have here to go un-noticed… 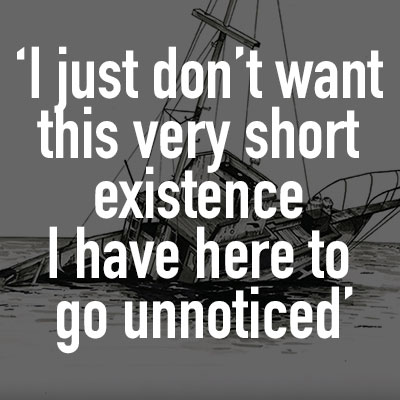