I have now been informed that due to another technical hitch (digital transposition no less) that although we are being further delayed that I am likely to be able to release Pt 3 on OCT 1st ! Woo Hoo and fingers crossed. So this week (99) I am showing the back cover blurb and asking for YOU guys to give me a title for it? At present I’ve entitled it “Can he survive the journey?” But I think for my last book in this series it’s weak and needs more Umph! Let me know what YOU would use and you never know your words/idea might be immortalised?

Here is the passage I need the title for:-

CAN HE SURVIVE THE JOURNEY?

Continually staring into the abyss of his own confusion, Brody Martins once again attempts to lead his friends out of danger. His one single, catastrophic mistake transported him to this world of madness and contradiction. Having to return home to set things right, his turmoil is exacerbated by his ignorance of the original error. The obstacles he must now face continually thwart his efforts to escape and gradually drive his mind ever closer to breaking point.

Charlotte’s striking physical similarity to Charley creates a singular moral problem for Brody to ponder and it only adds to his anguish when the two meet. His emotions are pulled in all directions and something has to give. Realizing he’s being monitored and manipulated by Evet, Brody attempts to build mental barriers to block his nemesis. Baffled by a parallel resemblance between his current situation and his other life back home, Brody must find a way to solve the riddle of the Necronomicon. Its true nature and connection to Evet hold many of the answers he seeks.

If he finds a way back home, will anyone believe where he’s been? To stop Evet’s next devastating attempt to achieve immortality may require the ultimate sacrifice. Only the perception of how it all began opens Brody’s mind enough to determine how to close this Pandora’s box of distorted reality. Following his heart, Brody risks all to defeat Evet’s plans. But will he also finally discover the depth and true nature of his own suppressed feelings?

Thanks, I’m looking forward to hearing your ideas. 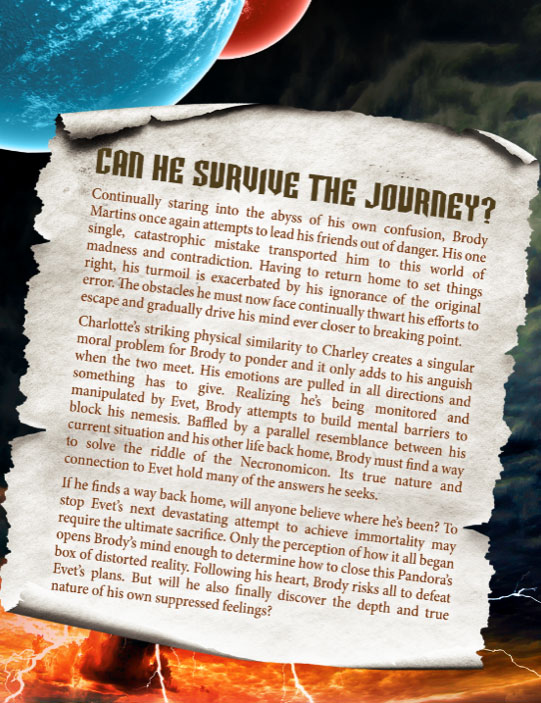